Our philosophy about how to breed and raise cattle has changed little over the years. We strive to produce polled, easy-fleshing, moderate-framed cows that will raise their calves on the available forage resources.

We have been breeding and selecting for quality Charolais for a long time. The pedigrees of some of the heifers in the Corman Charolais herd trace back 13 generations. We use artificial insemination to breed with proven performance sires, and maintain quality herd bulls for natural cleanup service. We typically synchronize the breeding of cow herd and heifer through the use of CIDR® implants and timed AI breeding. We breed to calve in late February-April (in a tight 60 day period), and fall calving cows in late August-October.

A calf’s weaning weight, without creep feed, is a reflection of the cow’s natural milking ability. We feel the cow should wean off a moderate size calf while maintaining body condition and breeding back in a timely manner, and do so on available forages.

All calves are weighed at birth, at weaning, and as yearlings.

We typically process our calves and give first round of shots 2-3 weeks prior to weaning, typically at 7-8 months of age. When calves are weaned, they are weighed and receive a second round of shots, along with branding and appropriate parasite control under the direction of our veterinarian.

The bull calves are sorted off and started with a growing ration to allow them to express their genetic potential for growth. At 12-14 months of age, bulls are weighed and semen tested. Scrotal circumference info is also gathered at this time.

At weaning, heifers are penned separately and given access to pasture for a forage based ration and small amount of grain to both aid in the growth and to ensure quiet handling ability and gentle disposition. At 12-14 months, heifers are weighed and given a pelvic tract exam by our veterinarian to determine ability to breed at approximately 15 months of age. 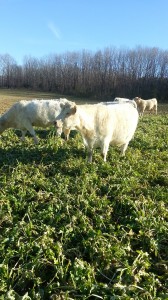 We consider forage an essential part of operations. We typically grow fescue for fall, winter, and spring; bermuda grass for summer, and alfalfa/orchard grass mix for hay and some grazing. Due to the drought of 2012 we have for the first time utilized fall seeding of annual rye grass and also wheat and turnips to extend the grazing season.

Over the last few years, we have been renovating our old Kentucky 31 fescue fields and converting them to Novel Endophyte tall fescue and a legume. Those fields of KY 31 that we have not renovated, we have worked to integrate red clover.

We typically sell our breeding bulls at 14-18 months of age by private treaty, primarily to commercial breeders within a 100 mile radius of Pomona and by consigning to Peterson’s Top Pick sale each March. Females are typically consigned as cow/calf pairs to the annual Renaissance sale held each April in Strafford, MO and the Autumn in the Ozarks sale each Labor Day, also in Strafford. We rarely sell females at private treaty, relying almost exclusively on auction consignments.