Our association with Charolais cattle began in the fall of 1958. In an effort to increase the frame size of his basic commercial cow herd, C.R. and Joanna, along with their five-year-old son, Dan, travelled to Chillocothe, MO and purchased a 7/8 Charolais bull from Charley Litton. This was the first Charolais bull in Howell County, if not all of south central Missouri. We have been using Charolais bulls ever since. We have retained the best heifers, culled cows that do not produce or do not have the right disposition. Since 1974, Corman Charolais has exclusively used polled Charolais bulls. 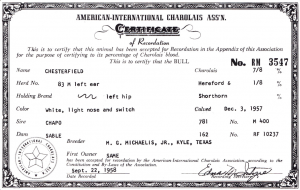 WC Gasconade 4069 P, a son of Camelot, was acquired by C.R. Corman at the 1985 Wesson Sale. Next, Spain’s Polled Paul P was purchased from Willard Walker. These two sires were the foundation of the herd that C.R. dispersed in a sale at West Plains, MO held on September 5, 1994.

Dan obtained his start with cows and heifers from C.R. and Joanna’s herd acquired over a period of several years. In addition to AI breeding, Dan has acquired and used several herd sires over the years.

WCR Sir Ease 9519 ET P was purchased from Wienk Charolais Ranch in the fall of 1996. Sir Ease was the son of a Harlan Rogers cow, and many of his granddaughters and great-granddaughters remain in the herd.

Another Wienk bull was acquired as an embryo out of ET program and calved on September 8, 1998. Pomona Paul 109/9 was the son of the first certified meat sire in the Charolais breed, Paul 109. Several of his progeny are still in the Corman Charolais herd, and tend to be larger, big-boned, cream-colored solid cows. 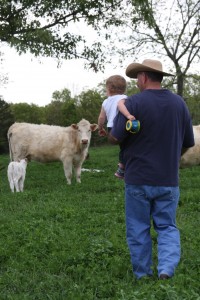 More recently, we’ve used a son of Mac 809, acquired at a Peterson Farms bull sale in 2003. PF 809 CR was a good dispositioned, moderate-framed, muscular son of JWK Caroline G003, which is a 914 daughter out of the famous WK Caroline 0832. He passed on to his daughters a good disposition, easy fleshing ability, and a good tight udder with small teats. PF 809 is very much a calving ease sire.